Integrated Mobility and Innovative Planning at the Heart of Griffintown Redevelopment

Formerly an industrial hub in the Sud-Ouest borough, Griffintown is currently being requalified to become a lived-in, diversified and dynamic Montreal neighbourhood. The construction of some 15,000 residential units, the addition of 400,000 m2 of retail and office space, and the consolidation of the École de technologie supérieure (ÉTS) will ensure that the public domain is adapted to offer a quality living environment.

Since 2015, FNX-INNOV, in collaboration with Civiliti, has been supporting the City of Montreal in planning, designing and building an innovative, sustainable and more densely occupied public domain for the Griffintown neighbourhood. The complete redevelopment planned to date by the City innovates by putting forward new street typologies that enhance the neighbourhood’s unique urban fabric as a historic public backbone while completely transforming the way people live and move around the neighbourhood.

Neighborhood requalification presents many innovations that reinforce soft mobility as an important part of an integrated transportation system. The urban hierarchy highlights a new neighborhood core and is based on inhabited street typologies, hybrid streets with mid-height bike paths, quiet streets and “standard Griffintown” streets. Islands delimited by entrance and exit thresholds, raised platforms at intersections, new bicycle links, integration of mobility hubs and special bus platforms are among the specific developments designed to support mobility in this bustling sector of Montreal. The latter developments are also combined with proposals for greening and differentiated rainwater management.

The street hierarchy proposed for Griffintown is inspired by the Programme Particulier d’Urbanisme (PPU) and takes into account the hierarchical street pattern of Montreal. According to the PPU, three functional street classes create the fabric of the area: arteries, collector streets and local streets. The total length of all streets is 11 km, serving an area of nearly 1 km2.

The arterial streets, Peel and Wellington, cross the district from north to south for the former and from east to west for the latter. Their layout is planned as a standard street at a speed of 50 km/h with a protected bicycle path and wide sidewalks with tree plantations for a feeling of safety despite the flow of vehicles passing on the nearby traffic lane.

Four new street typologies are designed within the neighborhood. Collector streets take the form of standard or hybrid streets depending on their location. They delimit the ilets and are designed for speeds of 30 or 40 km/h. In particular, William Street and Ottawa Street take the form of hybrid streets – streets that separate the more commercial areas on the periphery of the neighbourhood from the more residential core of the neighbourhood. These streets are bordered by a half-height bicycle path that allows transit cyclists to maintain a significant speed along their route, and wide sidewalks that provide an enhanced walking experience for pedestrians.

Of the 72 intersections in Griffintown, 13 are managed by traffic signals and 37 by stop signs. The remaining intersections are not controlled in any way because of their direction of travel.

Simulations using Autoturn software were performed for each intersection to verify the turning of HSU (Heavy Single Unit) trucks. This design vehicle includes single heavy trucks with double rear axles representing buses, fire trucks and those used for garbage and snow collection. An obstacle-free turning zone is provided at each intersection to ensure truck-trailer access – WB-20 – to each street.

Among the priorities for serving street users, the first was pedestrian service, the second for cyclists, the third for public transit and the last for car travel. The development vision for the sector thus reframes the paradigms of use and sharing of the public realm, resolutely focused on the function of housing rather than vehicular traffic.

Pedestrian safety is ensured by short street crossings – one to two lanes maximum to be crossed, by the implementation of podotactile slabs for visually impaired people and by the implementation of bus stops that prevent bypassing by another vehicle during disembarkation/embarkation. In addition, a large number of neighbourhood intersections are elevated, forcing traffic to slow down, a role that speed bumps play in other parts of the city. 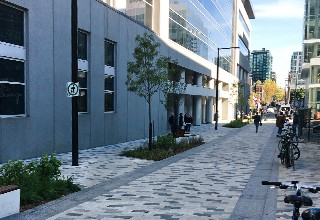 There are two-way bike paths, 3 m wide, planned on Peel, Wellington and De La Commune streets. Five streets in Griffintown include a one-way bike lane. They must serve bicycles but also 72 small motorized vehicles for people with reduced mobility and for able-bodied people (72 according to the Université de Sherbrooke). All one-way streets can be used by cyclists in both directions (two-way cycling).

Among North American metropolitan areas, Greater Montréal ranks, along with Vancouver, as the fifth region with the highest proportion of commuters using bicycles to get to work, behind the Portland, Ottawa, San Francisco and Sacramento regions.

Several central boroughs in Montréal whose built environment is more conducive to daily cycling, particularly because of higher density and mixed use, have modal shares of cycling exceeding 3% even in the fall. This is the case in Ville-Marie (3.5%), where the rate of bicycle use could exceed 20% in the short term. The proposed new network thus supports cycling with increased safety.

Griffintown is currently served by eight bus routes. Accessibility to public transit is provided within the three-minute (200 m) access isochron. Only one area south of Basin Street, between Seminary Street and Richmond Street, is served by a 5-minute (350 m) isochron.

As mentioned above, bus stops are located on arterial and collector streets in the area. These stops, most of which are located upstream from the intersections, create a safety zone for users waiting for transportation and for those getting off the vehicle.

With the redevelopment of neighbourhood streets, a significant portion of the parking spaces have been reduced to allow for the implementation of bicycle paths and lanes as well as wider sidewalks, all in keeping with the priority of service to users established for the neighbourhood.

Electric charging stations will be located in the Griffintown area in city-owned parking spaces. These spaces will be determined based on criteria to ensure visibility and safe use. Charging stations are considered street furniture. Sensitivity to its integration environment is essential – high-traffic areas for passers-by are to be avoided as the kiosks occupy space on the sidewalk. On the other hand, they should be located as close as possible to a power source. According to the borough’s by-law, one box out of 20 must be equipped for electrical recharging. For the moment, these charging stations are most often found on the quiet streets of the neighbourhood, where the population density in the area is highest.

The intersections where the crossings are elevated are planned in a trapezoidal shape with a length of the elevated portion varying from 5 m (length of a car) to 15 m to blend in with nearby driveways and underground structures on the roadway. The height of the vertical offset is proposed to be 75 to 100 mm. The connection ramp is 1.4 m long (equivalent to the width of most planted strips) and has a slope of 5% to 10% maximum.

Mobility hubs have been integrated into the concept. Pole #1 is the one at the intersection of Guy / William / Ottawa streets. It includes a bus stop, a cab stand, a BIXI station, self-service spaces, electric charging stations, bike racks and a “Biciborne” or “Cyclohalt” bike repair station. Pole no. 2 should be integrated into the REM station. Its equipment is similar to pole #1. Pole No. 3 is proposed on Notre-Dame Street, in the area of the intersection with De La Montagne Street. Its equipment should be similar to the equipment in pole No. 1. These mobility hubs will eventually be areas where citizens will be able to easily and quickly change modes of transportation without having to travel significant distances.

A former industrial area inherited from the 19th century, the Griffintown district is undergoing profound change. Its transformation has only just begun, but in the long run, with the restructuring of the neighbourhood’s streets to make it a pleasant and safe place to live, the implementation of secure bicycle paths, bus routes to serve a growing population, and the development of intersections and streets with priority given to pedestrian and bicycle service, it is a good bet that Griffintown could become a model of cohabitation for the different modes of transportation in Montreal.

Finally, it gives public space a predominant role in animating and stimulating human activities that are essential to the vitality of the neighbourhood, firmly inscribing it in the values of the 21st century.